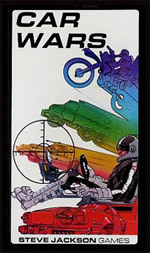 From Steve Jackson Games:
Long story short: If the Ogre Kickstarter project hits $700,000, we will schedule Car Wars for 2013. With forums and surveys starting in 2012 to determine exactly what you want. And those forums will be available only to those who support Ogre at the $23 level or above.
Not coincidentally, the $23 level does not require you to buy any Ogre stuff you don't want. (It horrifies me that someone might not want Ogre stuff, but we have to admit the possibility.) At the $23 level, you get the shirt that says "I Made Steve Jackson Work On Car Wars." It will be based on the original Car Wars cover.
With only four days left in the Kickstarter campaign, this would be a very good idea for you to tweet, or blog, or actually talk to your friends face to face, to make sure they hear about it, because we'd really like to hit that goal (and get past it to the $750K mark, which puts another exclusive sheet in every Kickstarter copy).  And we really don't want to get the sad letters saying "Pleeeeeze, I didn't support, but can I get onto those forums and help plan the new Car Wars?" Because that's a big 10-74. Negative.
Spread the word now, because time is short!
-- Steve Jackson
-------------------------------------------
Here is my take, while I am a fan of Car Wars, and as a kid I made up more cars then played them, I feel like you are held hostage by OGRE (it did make this goal, so it will be made), you do not get it unless you support another game is weird, you can not help form the game unless you paid us and supported another game, just feels, well OGRE like.

I like all of SJG stuff, and I met a few SJG people in my time, all real nice.  But somewhere deep inside me this bothers me, I never played OGRE do not want to donate money to A so I can talk about B in 2013, so while I will support Car Wars, and play it when it hits, I will not be influencing it because I do not want to support a different game to have that ability.

As always, leave a comment here, on FB or email me!
Posted by Unknown at 3:20 AM