I am an MMO fan, I need something different, a sandbox MMO sounds real nice.
Here is the info taken from their Kickstarter page 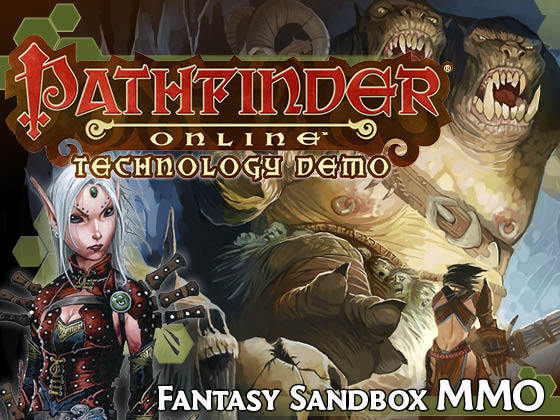 We’ve heard it our entire careers: “Are you crazy?” “It can’t be done.” “Nobody would buy that.” “It’s impossible.” Yet we have succeeded in doing the impossible, time after time after time.
A roleplaying game where you play the monsters rather than the heroes? Are you serious?
Vampire: The Masquerade had its 20th anniversary last year.
Wait, you want to make a card game where you have to create your deck by buying booster packs of random trading cards? Nobody would buy that.
Magic: The Gathering is by far the most successful game ever in the history of tabletop gaming, and will celebrate 20 years in 2013.
You want to do WHAT? Make the Dungeons & Dragons game mechanics open source? That’ll kill the entire industry!
The Open Game License (OGL) revolutionized the RPG market in 2000, leading to hundreds of companies producing products compatible with the Third Edition of D&D.
Hold on—you’re going to create your own game to compete with Dungeons & Dragons? You’re wasting your time!
The Pathfinder Roleplaying Game is now the world’s best-selling tabletop RPG.
So when we told people we wanted to create a massively multiplayer online roleplaying game (MMO) for a fraction of the cost and development time of the big MMOs, you can imagine some of the responses we got.
It’s a pipe dream! Nobody can do that. It’s impossible.
Well, we’re the team that laughs in the face of impossible. Pathfinder Online is the project that will slay this dragon. And Goblinworks is the company that will make it happen. Impossible? We say nay!

Pathfinder Online is a hybrid sandbox/theme park-style MMO where characters explore, develop, find adventure and dominate a wilderness frontier in a land of sword and sorcery. The Pathfinder world is high fantasy in the tradition of epics like The Lord of the Rings, Conan, The Wheel of Time and Game of Thrones.
The Pathfinder setting includes many different classic and modern fantasy elements, from lost cities shrouded in misty jungles to decaying pyramids amidst deserts of burning sands to a fantastic island metropolis where folk from across the world live side by side with all manner of fantastic creatures. The Pathfinder world has a place for any story a player wants to tell. (For more information on the world of Pathfinder and the Pathfinder Roleplaying Game, please visit http://paizo.com/pathfinder.)
Pathfinder Online’s robust trading system puts players in control of the world’s economy with player-created items, consumables, fortifications, and settlements. Character-controlled settlements can grow into full-fledged kingdoms that compete for resources as they seek to become the dominant force in the land, raising vast armies to hold their territory against the depredations of monstrous creatures, NPC factions, and other player characters.
Social organizations scale from small parties of a few adventurers to player nations inhabited by thousands. As settlements develop, the surrounding wilderness develops more complex and challenging features, including randomly generated encounters and resources as well as exciting scripted adventures.

For the past several months, the Goblinworks team has been working on three major projects.  We’ve been recruiting talent to fill out our art and design teams.  We’ve been working to make a final selection of the middleware that will drive Pathfinder Online. And we’ve been talking to investors to raise the capital we need to go into active production.
We announced Goblinworks and Pathfinder Online this past November because we wanted you, our community supporters, to hear about it first from us rather than getting hints from the grapevine that something was up at Paizo.  Since that announcement, we’ve had amazing meetings with MMO publishers and developers, game designers, and potential investors.
We’ve had to do all three of these things in parallel because there are a couple of intersecting “chicken and egg” problems here. Investing at this stage of a project is very much about having faith in the people working on the project—and we have some amazing folks who want to work with us, but they have careers and family obligations, so they can’t just pick up and relocate to Redmond on the hope that we’ll get the funding we need.  We’ll also need to show our investors specific details about our financials, which are affected tremendously by the deal we can secure for our middleware—the engine that runs the game. Our business experience and social networks have provided us access to some awesome middleware deals that aren’t readily available to outsiders, but sealing those deals is tied to the staff and funding issues as well. In short, we need to move forward before we can move forward.
And then the Internet Changed Everything. And the harbinger of this change is Kickstarter!
Seeing the Kickstarter success stories of Double Fine, The Order of the Stick, Wasteland 2, and Shadowrun Returns (to name just a few), we realized that Kickstarter could be just what we need to break through our roadblocks.

From the very beginning of Pathfinder Online, we’ve had a firm goal: we want a very close symbiosis with our customers, getting their feedback on our design ideas and, once the game is launched, iteratively adding content to the game based on their feedback. To provide transparency on our plans, we’ve been doing bi-weekly design blogs at https://goblinworks.com/blog, and we’ve been getting your feedback on the Goblinworks messageboards at http://paizo.com/paizo/messageboards/paizoPublishing/licensees/pathfinderOnline. We’ll continue to update the blogs and interact with our community throughout the Kickstarter process—and on into the future.
But right now, we need you to help us in a new way. We need you to help us PROVE to the world that our impossible dream is possible.

This Kickstarter will fund the Technology Demo of the Pathfinder Online Massively Multiplayer Online RPG.  The Technology Demo will be fully playable, integrating account management, character creation, a virtual world server, multiple simultaneously connected clients, middleware used for rendering landscapes and characters, basic game mechanics, and player communications.  The demo will only support a few simultaneous users exploring a couple of small locations, so the general public won't be able to play it, but we will produce a short video of the demo that everyone will be able to experience, and a special longer video exclusively for backers of this Kickstarter.
Your support of the Technology Demo will help us raise awareness of Pathfinder Online and will show potential investors what the game is really about.  Funding this demo will also signal to potential partners that Pathfinder Online has an audience that's large enough and dedicated enough to allow the long-term success of the MMO. Nothing speaks louder than a ton of people putting up money to show their support of a new concept—that’s the genius element of Kickstarter!

Since this Kickstarter isn’t meant to fund the final video game, we had to think outside the box a little bit. Pathfinder Online is based on the world created by Paizo Publishing for their tabletop Pathfinder Roleplaying Game, so we thought it would be pretty cool to work with Paizo to create an RPG book that details one of the locations that Pathfinder Online characters will start in. We settled on the town of Thornkeep—that’s the very same “hive of scum and villainy” that the Pathfinder Online community named in our first online poll back in January! To make Thornkeep come alive, we’ve enlisted the talents of veteran game designer Rich Baker. Rich is going to give you everything you need to run a Pathfinder RPG game in Thornkeep, including the surrounding woods and a detailed dungeon below the ruins upon which Thornkeep was built. This very same dungeon will also be built as part of our technology demo, providing a great window into how tabletop design will make the transition to the digital medium.

And that’s just the first half of a 64-page book! The remaining sections will be written by our Pathfinder Online design team, letting you into Goblinworks’ design philosophy and giving you inside information gleaned from the development of our technology preview. The Thornkeep book will be produced to Paizo’s usual quality standards—perfectbound, printed in full color, with lots of all-new original artwork, including a brand new beautiful cover painting by fan-favorite Pathfinder artist Wayne Reynolds (the cover you see here is a mock-up).
We didn’t stop there either! We’ve built up a wide range of Goblinworks-themed merchandise, from posters and T-shirts to an entire day spent playing Pathfinder and dining out with the Goblinworks staff at one of the world’s finest restaurants! We have a reward level for every pocketbook, so give them a look and tell us what you think!
Posted by Unknown at 3:36 PM