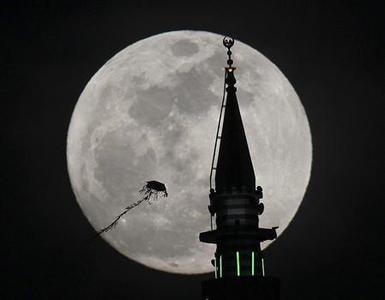 WASHINGTON | Sat May 5, 2012 3:51pm EDT
(Reuters) - A "super Moon" will light up Saturday's night sky in a once-a-year cosmic show, overshadowing a meteor shower from remnants of Halley's Comet, the U.S. space agency NASA said.
The Moon will seem especially big and bright since it will reach its closest spot to Earth at the same time it is in its full phase, NASA said.
The Moon "is a 'super Moon,' as much as 14 percent bigger and 30 percent brighter than other full Moons of 2012," it said in a statement.
The scientific term for the phenomenon is "perigee moon." The Moon follows an elliptical path around Earth with one side, or perigee, about 31,000 miles closer than the other, or apogee.
The Moon will reach perigee at 11:34 p.m. EDT (0334 GMT on Sunday). One minute later, it will line up with the Earth and the Sun to become full.
The last perigee Moon was on March 19, 2011, when it was about 250 miles closer than Saturday's.
A perigee full Moon can bring tides that are higher than normal but only by an inch or so (a few centimeters). The effect can be amplified by local geography, but only by about six inches.
The light from the perigee Moon will wash out all but the brightest fireballs from the springtime Eta Aquarid meteor shower, NASA said. From 40 to 60 meteors from the shower normally can be seen each hour.
The Eta Aquarid meteors make up the debris trail of Halley's Comet, which passes by Earth every 76 years.
Posted by Unknown at 5:15 PM