Cover Art: From Concept to Creation: Part I

I will be honest I love art!  And when I see a piece that I thought of come to fruition, it is one of those weird great joys that I get.
This will be a look into the creation of one such piece of art, the cover for The Awakened anthology that I am the lead on.  Since I have an art director background I was fortunate enough that the publisher let me work with the artist on the cover and be my own art director.  I say this because it is true, not many people get that much influence over a cover.  So thank you Neal Levin.
I have had this image in my head for years, even though this book will not be available till early 2013.
I will not be going into how to find an artist, all I will say is find one that you feel can do your image justice, make sure the artists is comfortable with the medium and understands the project before you start.  I wanted a realistic feel to the piece, so someone who could pull that off, examples of whom came to mind for me were Frazetta, Ken Kelly, JP Targete, to name a few.

© Ken Kelly
It starts out with a mental picture (for the untalented in art such as myself this is as far as it gets).  From there I like to describe the image to the artist with as much detail as needed but not too much because I really feel the more room you leave for artists the more they will embrace the image and try and take it to the next level.

So once Greg agreed to do the piece I sent him a description like so:

Here is a description of the 2 humans:
Tangris was a tall with shoulder length blonde hair male who hovered about 6'2" and had a tough sinewy build.  He was a good fighter and was going to be a hunter as soon as he completed his rights to adulthood.  He had a great family and felt blessed he would be a hunter, that was a position of importance to people in his village.  He had an old sword and his father's bow which he fletched arrows himself to save money.  His best friend Fritien was also of age to go through her rights of adulthood.  Fritien was medium build about 5'4" and quite well proportioned for a women of her size, she had long flowing brown hair that always had some bit of nature holding it in place, and wore frugal and smart clothing.

I envision all 3 maybe on a cliff side of a ledge looking straight out from the cover, Tangris in chainmail shirt and leather armor and a leather bracer on his left arm since he is a bow hunter, sword on his left side a quiver of arrows on his right hip and holding the bow with a notched arrow at a downward angle but able to move it up quickly so the bow will look like a smile not up and down.  Fritien will be looking out holding a long curled wooden staff, her area is nature magic, so I would love her hair to have a circlet of flowers and her "casting" a spell and we see bark raising from the ground to appear like it will be a shield in front of her, and then Vigi the lion, he is a standard lion but the IQ of a person, so he will also be patient but ready to attack on a moment's notice.  Background can be plains and one of the features in the world is 2 moons so maybe both coming up on the left side.  With them being on a ridge that gives the publisher some room below for authors names as well as the right side (no moons rising) and the top will be the title.

I figured Tangris would have ranger type clothes and colors and Fritien, well no idea so whatever colors work with the rest.

The 3rd character was a black lion. 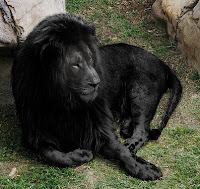 And here was one of the first versions of what came to me via the internet. 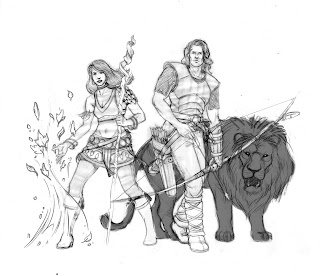 To be continued on Greg Opalinski's blog here....

The Awakened  ©Hal Greenberg
Posted by Unknown at 3:50 PM