After receiving a few great sketches and a rough of the background I decided it needed more movement.  I wanted it to feel that when you looked at the cover the characters were about to attack you.

We ended up tweaking the female, Fritien a lot.  In my initial thought I wanted her to be pulling bark from the ground and moving it up as a shield, it did not translate well on the page like it did in my mind.  So I decided to make her hold a wooden staff and cast a spell.


After looking at it I felt it was too static.  I asked the help of a long term writer and overall nice guy Ed Greenwood for some feedback.  He had huge insight on the image and helped bring the cover to its next level.

We moved the lion's head down lower to look more threatening, we moved her hand back as if she was launching a spell and we took the male and made him more threatening as well as had the bowstring pulled back more to add more tension to the piece. 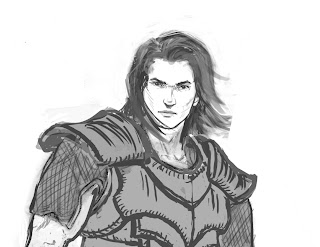 As the art director I was more worried about the feel of the cover and Greg did do many tweaks (thank you so much) to get it to where we all felt it was ready to paint.
As far as what Greg did to tweak or change the piece, how the feedback adapted to the art, check his continuation of this on his blog soon!