Had a great meeting with my business partners and we are moving along...

Fall of Man RPG Kickstarter should launch third quarter of 2013 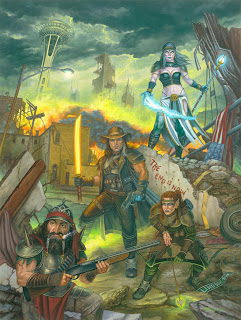 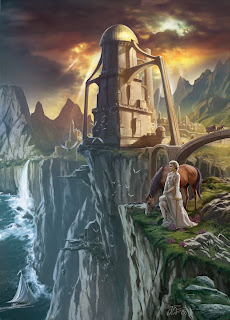 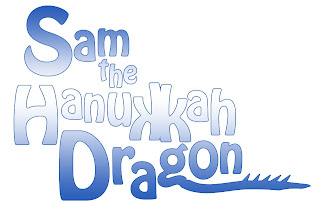 I personally have Sam the Hanukkah Dragon, which is written now I am working with the artist on the art, that will be a side project and will be ready when it is ready.

Have some other things I am working on and for with other people and those will happen when they happen.

Bluffside for C&C will be available for pre-order soon on the Troll Lord website soon.

And Dark Quest books seems to be trying to wrap up the backer surveys by the end of the month and I am hoping to have all the bookplates to him by mid-September, I think we have 3 more sigs to get.

I am currently working as Tony Sczcudlo's agent for new projects so if you would like a very talented and well known artist drop me an email and let's talk before he gets booked.

We have 2 PDF's available for C&C right now, one is free over at RPGNow.com

Let me preface this by saying sorry that we missed a few events/seminars I had plans on going but we had some issues with the hotel and just getting older.  I need to specifically say sorry to Matt Forbeck who I had 3 events to see him and missed all 3.  I know you had family with you or I would of tried to meet outside of those.

Also if I missed you in the update I apologize, so many great things happened it was not intentional, trust me.

OK, now that the  disclaimer is done, onto the recap--

Wednesday: Got in around 11AM, went to the hall and mingled a bit and got our passes from the Troll Lord team.  Mingled, walked and had some nice impromptu meets with Angus Abranson, and Stan! (Brown), Ed Bourelle to name a few.  We went around and saw a lot of the booths, and as the feet got a rest towards the end of the day we saw the booth The Troll and Toad booth take a tumble, it was bad on the equipment but nobody got injured.

What we missed: The Diana Jones Awards.

Thursday: Got over to the con around 8AM, hung at the TLG booth for a bit even answered some early bird questions about C&C, and then we started our move, my friend Brian picked up the new Firefly RPG and had Margaret Weiss sign it, she was pleasant as always.  When we got there we saw a sad Chris Pramas outside with a bunch of boxes so like a superhero (Mutants and Masterminds reference) swept in and carried a few boxes in.  Met with Simon at Pelgrane Press to discuss our current projects and 13th Age as well as Erik Mona from Paizo and Steve C at the Trolls booth.  Signed a copy of Bluffside for C&C for a very nice and loyal C&C customer.  Met up with Derrick L and spoke to him for a bit about C&C and the future of Samurai Sheepdog and TLG.  Spoke to Ken Whitman as well and said hi to Larry Elmore.

Had some discussions about Bluffside and some other projects with the boys over at TLG and went well, have to ask the Troll Lord if the feeling was mutual.  Said hi to Monte Cook, who I have not seen or worked with in about 10 years, it was great to see him again.

Went to a seminar about screenwriting led by Daniel G and was impressed.

What we missed: Mayfair Event

Friday:  The Awakened signing and breakfast, all the authors at GenCon (less Erik Scott de Bie who had a seminar) showed and we spent 3 hours signing laughing and just having a blast, we decided it will be an annual GenCon event, with less signing and more laughing.  Ed Greenwood, Colin McComb, Jaleigh Johnson, Clinton Boomer and myself.  We also had Kevin Glusing a Kickstarter pledger and upcoming writer for the setting join us as well.  I hope Kevin had as good of a time as we did.  Colin was a blast to sit next to, it felt like we had been friends for years, we swapped some embarrassing stories so I won't let mine slip if he keeps his mouth shut.  I bought a Wayne Reynolds limited edition book and he was there and resigned it and goblinized mine, he is so mellow and great, he is someone I would like to work with in the future.

We went to a great seminar about novel outlines and Erik Scott de Bie and Brandon Sanderson were both great (as well as the other panelists).

What we missed: Two panels (one with Matt Forbeck-see above for apology)

Saturday: We wrapped up GenCon (leaving on Sunday AM), with congratulating the ENnie winners, stopping by a few companies and individuals and talked shop amongst those spoken to: Brian Berg, Stan!, Jason Engle, Angus Abanson, Bruce Cordell (who took a selfie with me-LOL), and finally was able to say hi in person to Shanna Germain (so pleasant, always smiling).  We playtested D7D Next and i got to catch up to Mike Mearls so that was an extra treat.

We ended the trip with a dinner at Shula's with the Troll Lord team, Bill Webb, Joesph Goodman, and Aldo Ghiozzi-it was a great way to end the trip.

Thank you Indy, GenCon and everyone there for letting me have such a great time.  See ya next year. 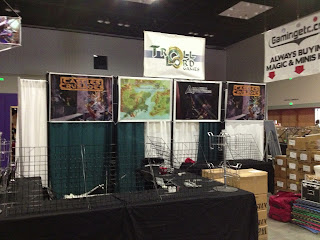 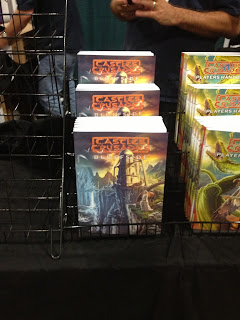 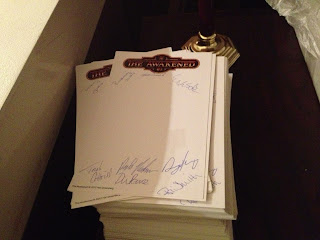 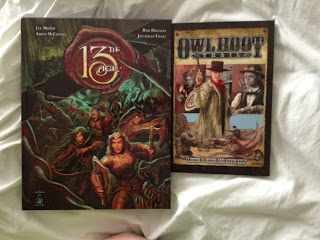 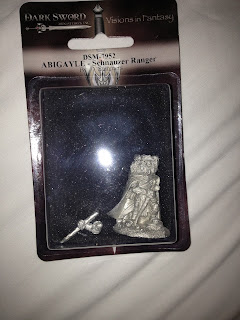 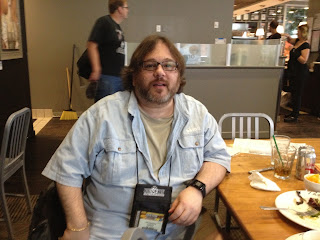 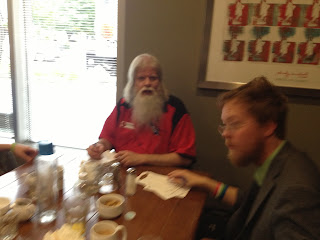 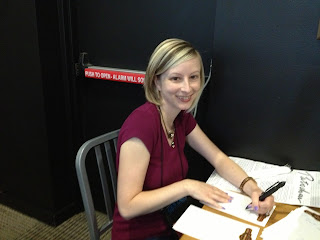 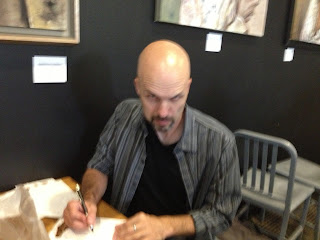 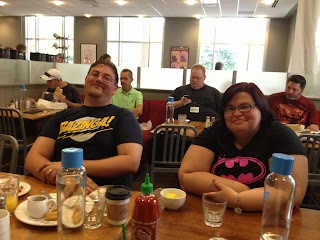 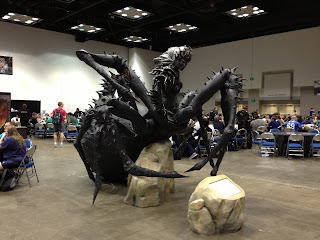 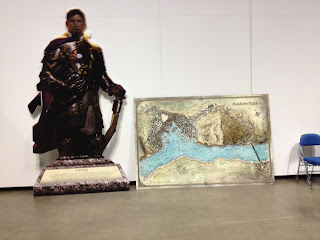 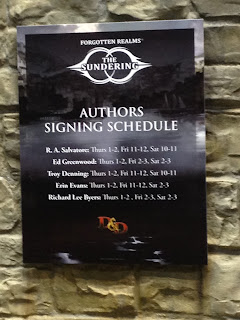 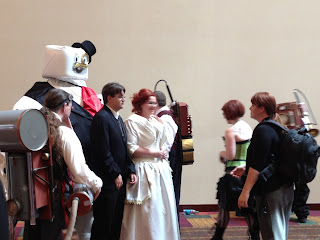 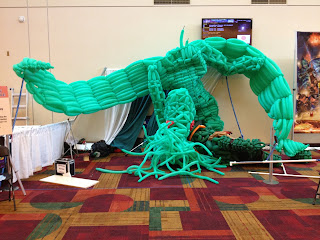 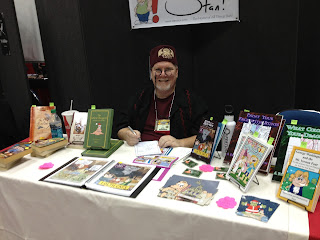 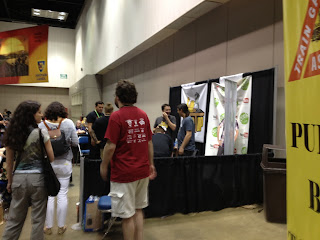 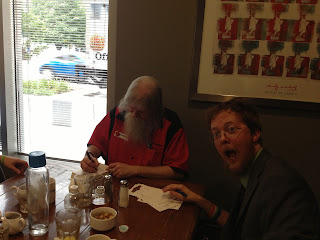 Here is my tentative schedule:

Wednesday-fly in, go to GenCon and hang out during set up.  Dinner with a fraternity buddy and the DJA at 9PM.

Friday- The Awakened signing breakfast, meetings with Pinnacle Games and others,  and some seminars.

Saturday-Walk around hall with Tony Sczcudlo and have lunch meeting with Jeff Easley.

Sunday-AM wrap up and leave for airport around 10AM to fly all day back home.

I know a lot more will happen but that is a brief rundown, I hope to see you there!

This is an interesting week for me,  I was not asked to be on any panels, I do not have a booth.

Sort of, this year we are planning a lot of stuff so I am havong a lot of working meals with people.
I am looking forward to it and can't wait, I am even going to a few writing seminars, which should be fun.

I will be around the Troll Lords booth some of the time, but mostly walking around, saying hi to new and old friends, and hopefully get some good plans started for 2014!

Posted by Unknown at 3:36 AM No comments: