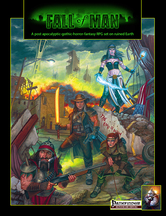 I have been a bad blogger, and for that I am sorry.
It has been over a month since my last post.

We have some great news about Fall of Man, it will be out this year and the tweaks are looking great. More about this and a few more RPG goodies in June.

Our next Expanded Race (Oasis Elves) should be out in June/July for C&C.

We have some boardgames in prototype stage and are a lot of fun, Adventure In is one of them.

Less than a week left for you to turn in the Open Call pitches for The Awakened: Isle of Bones.

We will have The Heroes of Gracia novel by Darrin Drader up on Amazon soon as well!

More projects and an exciting announcement soon™.
Posted by Unknown at 3:32 PM No comments: 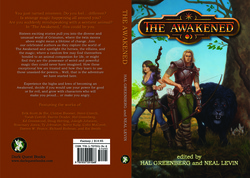 -All but a handful of the hardcovers have been or are being shipped. This means 90% of the hardcover backers should see their copy by mid-May! Thank you for your patience.

-The bonus story by Darren Pearce that was promised during the Kickstarter will be released this month.

-You still have the rest of the month to get your pitches in for the anthology The Awakened: Isle of Bones. If interested, click here and check it out!

-It is my birthday month! So how am I celebrating? By giving away presents to YOU!!! Just go to Goodreads for your chance to win a paperback version of The Awakened: Book I.

-If you have not bought The Awakened: Book I, what are you waiting for? If you already have, please head over and post a review and/or rating of it on these great websites:

Here is a great review of the book that was posted over at Roleplayers Chronicle.

-The Awakened: Book II has been written and is slated to be released in late 2014

-I am THRILLED to announce the next three cover artists for The Awakened: Books II, III and IV!!!

-The Awakened: Modern Books I and II have been approved and the first book is slated to be released in early to mid-2015

This is all great news and I can’t wait to get more info out as we are allowed! Thank you for your continued support.